Senckenberg scientists from Frankfurt and Müncheberg, together with a US-American colleague, have modeled the future distribution patterns of marine crustaceans for the years 2050 and 2100. In their study, published in the journal “Climatic Change,” they conclude that animals living in water depths above 500 meters will move northward as a result of climate change. In contrast, crustaceans found at depths below 500 meters will spread southward in the future. To this end, the team analyzed data from 94 crustacean species assuming two possible scenarios from the Intergovernmental Panel on Climate Change (IPCC) report – an increase in global mean ocean temperature by either one or by 4.8 degrees Celsius by 2100. The study is part of the “Beneficial” project regarding the biogeography of the Northwest Pacific fauna. The baseline study will help to estimate the extent of invasions of non-native species to the Arctic Ocean under the rapid global climate change.

Crustaceans are one of the most dominant animal groups in both shallow-water and deep-sea communities worldwide. Various studies suggest that crustaceans are shifting their ranges toward the poles or to greater depths as the oceans become warmer. “However, this assumption mainly applies to shallow-water organisms,” explains Dr. Marianna Simões of the Senckenberg German Entomological Institute in Müncheberg, and she continues, ‘On the other hand, it remains unexplored how global climate change affects the distribution of deep-sea communities and whether there is a difference here compared to the shallow-water fauna – even though the deep sea is the largest ecosystem on Earth!”

Simões, her Senckenberg colleagues Angelika Brandt and Hanieh Saeedi, and Marlon Cobos of the University of Kansas therefore analyzed more than 12,500 distribution records of 94 globally distributed, ground-dwelling crustacean species from 12 orders and developed climatic models  predicting for their distribution in 2050 and 2100. “We wanted to know how global climate change might influence the distribution and abundance of marine crustacean species within the reminder of the century. To do this, we used two Intergovernmental Panel on Climate Change (IPCC) scenarios for global mean ocean temperatures: An increase by one or by 4.8 degrees Celsius by 2050 and 2100, respectively,” adds the scientist from Müncheberg.

In addition to the possible horizontal distributional shifts of shallow-water and deep-sea benthic crustaceans, the researchers also discuss species-specific traits in their study that may lead to dispersal into new habitats – the so-called “invasion potential.”

Considering all factors, according to the modeling, crustaceans living in shallow water could relocate an average of 431 kilometers away from their original habitats by 2050 with a temperature increase of one degree Celsius, and 620 kilometers with an increase of 4.8 degrees Celsius. Projecting the data to 2100, the shifts estimations are between 435 and 1300 kilometers, respectively. “Deep-sea species, on the other hand, are not predicted to  move as far. By 2050, we predict a distance of about 90 kilometers at one degree of warming, and 110 kilometers at 4.8 degrees. By 2100, this still amounts to a potential distribution shift of 130 and 180 kilometers, respectively,” adds Simões. There are exceptions here, too: For the shrimp species Thor paschalis (Heller, 1861), the researchers predict a horizontal distribution shift by 3715 kilometers for 2050, with a water temperature increase of only one degree!

“What surprised us most, however, was the direction in which the crustaceans move,” says Simões, and she adds, “The species we studied that live above a depth of 500 meters migrate northward. Crustaceans below that level move to the south.” A decrease in species richness in temperate climates and a potential increase in species richness in polar regions could be the result of this event. “However, not all species can adapt to changing environmental conditions,” qualifies Simões, and she cautions, “As anthropogenic disturbances such as fishing, marine mining, oil drilling, or warming and acidification of marine ecosystems increase, so does the pressure on deep-sea fauna. Although our study only covers about 0.3 percent of the total crustacean diversity, our results can help us to better understand the future magnitude of changes affecting the deep-sea life, allowing us to implement appropriate conservation measures.”

Additional information about the “Beneficial” project. 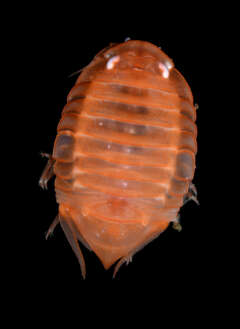 Crustaceans such as Tecticeps leucophthalmus Gurjanova, 1936 are one of the most dominant groups of animals worldwide in shallow water as well as deep-sea communities. Photo: Anna Lavrenteva 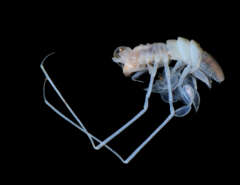 Considering all factors, according to the modeling, shallow-water crustaceans, such as the marine isopod Munneurycope sp. will relocate an average of 431 kilometers away from their original habitats by 2050 with a one-degree Celsius temperature increase; with an increase by 4.8 degrees Celsius, the distance will be 620 kilometers. Photo: Anna Lavrenteva