International researchers, including Senckenberg’s Dr. Adrienne Jochum, have discovered a new species of land snail in an approximately 99-million-year-old piece of amber. The snail’s shell features short, bristly hairs that are arranged along its margin. In their study, published in the scientific journal “Cretaceous Research,” the team, led by first author Dr. Jean-Michel Bichain of the Museum of Natural History and Ethnography in Colmar, France, concludes that the presence of hairs may have offered the mollusks a selective advantage in their evolution.

The fine hairs, measuring only 150 to 200 micrometers in length, were detected on the shell of the newly discovered species Archaeocyclotus brevivillosus sp. nov. using classical microscopy and 3D X-ray micro-computed tomography. “This is already the sixth species of hairy-shelled Cyclophoridae, a group of tropical land nails, found so far embedded in Mesozoic amber, about 99 million years old,” explains Dr. Adrienne Jochum from the Senckenberg Research Institute and Natural History Museum in Frankfurt and the Natural History Museum in Bern. Dr. Jochum explains that “It is not uncommon for the shells of fossil and present-day land snails to be embellished with ridges, hairs, nodules, or folds; however, the development of such ‘decoration’ is still a complex process that usually does not occur without a purpose.”

The hairs on snail shells are formed by the uppermost proteinaceous shell layer (periostracum). Hairy shells are known from several families of land snails, including woodland snails or Polygyridae snails, suggesting that hairiness arose several times independently during the evolution of land snails, even in groups that were only distantly related.

“The new species, Archaeocyclotus brevivillosus, originates from a Cretaceous amber mine in the Hukawng Valley in Burma, where it was collected prior to 2017. The fossil snail is 26.5 millimeters long, 21 millimeters wide, and 9 millimeters tall. The shell’s outer margin is lined with short hairs that are bunched around the shell opening. Its name derives from the Latin words brevis (short or small) and villōsus (hairy or shaggy),” says Jochum, describing the animal.

A total of eight species of the family Cyclophoridae have been recovered from Burmese amber, and six of them featured bristly shells. The scientists believe that this is no coincidence. They assume that the hairiness offered the snails an evolutionary advantage. “For example, the hairs could improve the animals’ ability to better cling to plant stalks or leaves – something that has already been observed in present-day snails. They may also have played a role in thermal regulation for the snail by allowing tiny water droplets to adhere to the shell, thereby serving as an ‘air conditioner.’ Or they may have protected the snail shell from being corroded by the highly acidic soil and leaf litter of the ancient tropical forest floor. The bristles could also have served as camouflage or protected the snail against a direct attack by stalking birds or soil predators. And finally, it cannot be ruled out that the hairs provided an advantage in sexual selection,” says Jochum, summarizing the possible benefits of hairs for the snails. 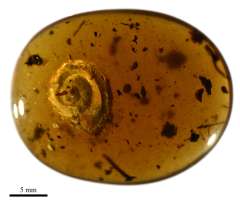 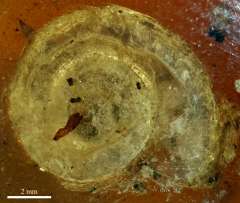 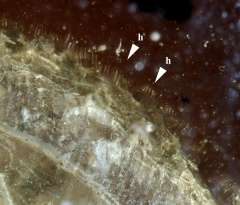 The margin of the snail shell is lined with tiny hairs. Photo: Senckenberg