Ride a heat wave or get damaged

Study on European beeches after heat waves: Researchers identified genes for drought resistance in some, but not all trees

Which trees will survive dry, very hot summers and which will suffer severe damage? Regarding European beech trees, this question may now be answered by genome analyses. A team led by Prof. Dr. Markus Pfenninger, LOEWE Centre for Translational Biodiversity Genomics and Senckenberg Biodiversity and Climate Research Centre, has studied damaged and healthy beech trees in Hesse, Germany and identified areas in their genome that are responsible for drought resistance. Based on these DNA sections, it is possible to predict for each individual tree how it resists longer periods of drought. Using targeted DNA tests, resistant specimens could now be selected for forestry in order to help beech forests adapting to climate change. The study was published in the journal “eLife”.

Anyone who wanders through German forests in summer will see brown, parched leaves and dead branches again and again. The long dry periods in 2018 and 2019 have left their mark. This was also observed by Prof. Dr. Markus Pfenninger, who conducts research at the LOEWE Centre for Translational Biodiversity Genomics and the Senckenberg Biodiversity and Climate Research Centre and teaches at Johannes Gutenberg University Mainz. Something caught his eye in particular: “In beech forests, not all trees are equally damaged. Completely healthy trees are standing right next to severely damaged ones.” Such pairs can be found all over the state of Hesse central in Germany. But how can that be?

The answer can be found in the DNA of the trees, as a study by Pfenninger and colleagues on around 200 tree pairs shows. The genome of European beeches, i.e. their entire genetic information in form of DNA, comprises 542 million items. Some of these items are identical in all beeches. Others, however, differ from tree to tree. This is precisely the case in healthy and severely damaged beech trees, as the genome analysis shows: around 100 DNA sections are decisive for drought resistance. In healthy trees, these sections contain, among others, genes that are known from other plants and enable a reaction to drought stress.

“The individual genetic equipment determines whether a beech tree is able to survive longer periods of drought or not,” says Pfenninger. Dr. Barbara Feldmeyer, molecular ecologist at Senckenberg Biodiversity and Climate Research Centre, explains: “Now that we can classify individual trees, foresters can choose particularly resistant trees, for example for reforestation. Hence, we can help beech forests to sustainably adapt to climatic changes.”

In order to achieve this, the researchers have developed a test to detect drought resistance in the genome of beech trees – even in their seeds. Researchers from Justus Liebig University Giessen, Johann Wolfgang Goethe University Frankfurt, TU Darmstadt and Hochschule Geisenheim University were also involved in the study.

The European beech (Fagus sylvatica) is widespread in Europe and the most common deciduous tree in Germany’s forests. In Hesse, beeches are found on about one third of the state’s forest area. Beeches grow at locations differing in environmental conditions and play an increasingly important role in sustainable forestry. They also provide a habitat for several thousand species, such as wood-dwelling beetles and larvae or woodpeckers nesting in tree cavities.

For the study, the researchers examined beech trees throughout Hesse in 2019 and 2020 – from Taunus to Rhine-Main area and Odenwald to Westerwald and northern Hesse. At each of the approximately 200 locations, they selected one tree appearing healthy and one neighbouring tree with severely withered or missing leaves for the analysis. The distance between these tree pairs was five meters on average. DNA was extracted from green leaves in the laboratory. Based on the genome data, the test with molecular markers for genes relevant for drought resistance was developed. The test was validated on about 90 beech trees with a success rate of 99 percent.

“Our study provides a scientific basis for the sustainable management of beech forests that supports the natural selection of resistant trees,” says Pfenninger. “Now the findings should be integrated into practice, for example in monitoring of natural forests or in selective logging and reforestation. Thereby, we can help to preserve a unique ecosystem that is already affected by climate change. There will be another heat wave – sooner or later.”

The LOEWE Centre for Translational Biodiversity Genomics (TBG) is a joint research institution of the Senckenberg Society for Nature Research, the Goethe University Frankfurt, the Justus Liebig University Gießen and the Fraunhofer Institute for Molecular Biology and Applied Ecology IME. Central focus of the centre is on expanding biodiversity research into the genomic basis of biological diversity. The aim is also to combine basic research on the genomes of a broad variety of organisms with the development of applicable services and products. The centre is funded by the Hessian State Initiative for the Development of Scientific and Economic Excellence, called LOEWE.  Further information: https://tbg.senckenberg.de 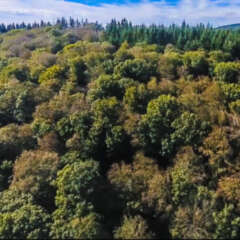 Consequences of hot and dry summers on beech forests are obvious when looking at their crowns: Almost half of the trees are damaged in many places in Hesse.
Drone pilot: Volker Heymann
Photo: Markus Pfenninger 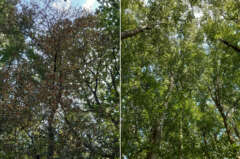 Neighbouring beech trees in Kelkheim-Eppenhain in Hesse (Germany). While one of the trees is healthy (right), the other one has suffered severe drought damage (left).
Photo: Markus Pfenninger