A Snake Crosses the Alps

A research team from the Senckenberg Natural History Collections in Dresden and the Zoological State Collection in Munich has studied the occurrence of the Italian barred grass snake in Bavaria. Based on over 1000 samples, they show that the snake, which was only recently discovered in Germany, spread northward after the Ice Age. In the process, the snakes successfully crossed the Alps – which are usually considered as a pronounced natural barrier. They were only stopped when they encountered the related common grass snake in southern Bavaria. The study was published today in the “Journal of Zoological Systematics and Evolutionary Research.”

Until recently, the Italian barred grass snake (Natrix helvetica sicula) was known exclusively from Italy and the southern Alps. “However, in 2019, a team led by Frank Glaw and Michael Franzen from the Zoological State Collection in Munich provided evidence of the occurrence of this snake in several districts in southern Bavaria,” says Marika Asztalos, a doctoral student at the Museum of Zoology of the Senckenberg Natural History Collections in Dresden, and she continues, “We now wanted to know how the snakes made it to Bavaria, how widespread they are, and whether they interbreed with the other grass snakes there.”

Based on the genetic analysis of 1031 specimens, Asztalos, together with Professor Uwe Fritz and other researchers, including Frank Glaw and Michael Franzen from the Zoological State Collection in Munich, investigated the distribution of the various forms of grass snake and showed that the Italian barred grass snake is restricted to the river valleys of the Inn, Isar, and Loisach in southernmost Bavaria. Where these rivers flow out of the Alpine valleys into the plains, the distribution range of the barred grass snake ends rather abruptly, and only the native common grass snake (Natrix natrix) is found a few kilometers farther north. While the Alps could not stop the spread of the barred grass snake, the strong presence of grass snakes living farther north was able to accomplish this.

“Our study shows that the Italian barred grass snake spread via Alpine passes to Tyrol and Bavaria in the post-glacial period,” explains Fritz, and he adds, “In western Germany, another subspecies of the barred grass snake occurs in the Rhine region, which took a different route. It migrated to Central Europe from France, which has been known for some time now.”

For the first time, the team now also detected traces of the western barred grass snake (Natrix helvetica helvetica) in Bavaria, namely in the Lake Constance region and in Lower Franconia. Although in both cases this only involved hybrids with the native common grass snake, a more intensive search in these regions could still lead to the discovery of largely pure populations.

Out of the 208 samples from Bavaria, Fritz and his colleagues were able to assign 90 individuals to the Italian barred grass snake – although the majority were hybrids between the immigrants and the native common grass snake. “Similar hybridization processes are already known to us from the Rhine region, but in southern Bavaria they are limited to a narrow hybrid zone of a few kilometers, where the respective parent species also occur,” adds Asztalos in summary. 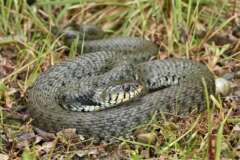 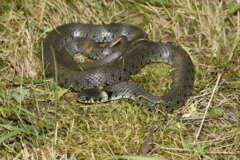