The new special issue of the Senckenberg journal “Palaeobiodiversity and Palaeoenvironments” published today is dedicated to Prof. Dr. Dr. h.c. Volker Mosbrugger, who recently retired after 15 years of service at Senckenberg. Three newly discovered fossils described for the first time in the publication – a flower, an alga, and a fruit – were named after the former Director General of the Senckenberg Gesellschaft für Naturforschung.

At the beginning of this year, Prof. Dr. Dr. h.c. Volker Mosbrugger passed on the office of Senckenberg Director General to his successor, Prof. Dr. Klement Tockner. “Volker Mosbrugger spent 15 years at the helm of Senckenberg and played a key role in shaping the society. Moreover, during the last 40 years, he has earned a reputation not only as a leading palaeobotanist but also as an excellent mediator between science and society,” explains Prof. Dr. Dieter Uhl of the Senckenberg Research Institute and Natural History Museum in Frankfurt, and he continues, “We therefore decided to dedicate the current issue of our journal to him!”

For this reason, Uhl, together with his colleagues Angela Bruch (ROCEEH Research Unit of the Heidelberg Academy of Sciences and Humanities) and Torsten Utescher (Senckenberg Research Institute and Natural History Museum Frankfurt), consequently recorded Mosbrugger’s academic path in the introduction to the new issue. “His awards and memberships alone would fill numerous pages,” says Uhl with a smile. But the geoscientist from Frankfurt and an international team of authors decided on a different way to honor Mosbrugger. “The journal contains the new descriptions of three fossil plant species named after Mosbrugger,” explains Uhl.

Uhl himself, in conjunction with an international team, described a newly discovered fossil flower from the French fossil site Menat. The plant, with petals about 3 millimeters long, dates from the Paleocene; it is approximately 56 million years old and now bears the name Menatanthus mosbruggeri. Due to the excellent preservation in a former Maar lake, even the stamens with pollen grains are clearly visible in the flower, reminiscent of modern-day mountain laurels (Kalmia).

A fossil alga found in northwestern Bulgaria now also bears Mosbrugger’s name. The new species Closterium mosbruggeri represents the first fossil record of this ornamental algae genus in Europe, and the third worldwide. The elongated plant fossil is between 12 and 11 million years old and may help to better understand the evolutionary history of this genus of algae, which is now widespread around the globe.

The recently deceased grand master of paleobotany, Zlatko Kvaček of the Charles University in Prague, dedicates his article “to Volker Mosbrugger, whom I deeply respect, both as a person as well as for his new approaches in paleontological research and his broad understanding of the evolutionary history of plants.” The 29-millimeter-long fruit Halesia mosbruggeri he describes comes from the Miocene of the Czech Republic and belongs to the genus of snowdrop trees.

Other articles in the special issue summarize Mosbrugger’s various research interests – from southwestern Germany to the Himalayas. 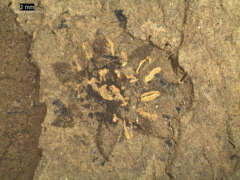 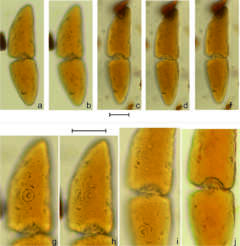 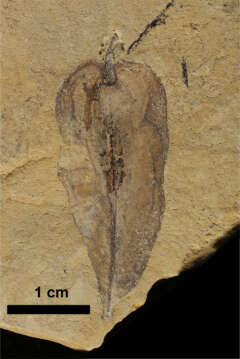 This fruit of Halesia mosbruggeri with a length of 29 millimeters was found in the Miocene of the Czech Republic. Photo: Z. Kvaček 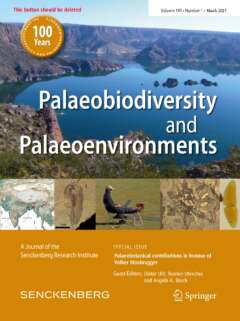