Mollusc of the year 2021: The Greater Argonaut

The Mollusc of the Year 2021 has been announced today, February 1, 2021 by Prof. Julia Sigwart, Section leader at the Malacology Department of the Senckenberg Museum, Dr. Carola Greve Lab manager of the LOEWE-Centre TBG, Dr. Tilman Schell, Bioinformatician of the LOEWE-Centre TBG, and Prof. Dr. Yasunori Kano, secretary of the worldwide society for Mollusc Research (Unitas Malacologica).


The Mollusk of the Year 2021 was selected from over 120 nominations submitted by international researchers and members of the public. The jury then selected five species that entered the second round as finalists. During this final round, the LOEWE-Centre for Translational Biodiversity Genomics website was open for the public to votes. The title „Mollusc of the Year 2021” was won by the Greater Argonaut (Argonauta argo). As a prize, Argonauta argo will get its whole genome sequenced at the LOEWE-Centre TBG.

Argonauta argo has been called the “most romantic” mollusc, evoking long sea voyages and a spirit of adventure. The Greater Argonaut is a type of pelagic octopus, which lives close to the surface, with only a passing resemblance to its more familiar octopus cousins that live on the seafloor. The female Argonaut has specially adapted arms that look like oars and secrete a paper-thin porcelain shell. The unique shell serves her as a boat and also a protective case for her eggs. The male of the species is very different, and much smaller than the female. Argonauts are also voracious predators, they bite their prey and inject a poison produced in their salivary gland. These curious seafarers are rarely seen, but they have captured the imaginations of over 7500 people from around the world who gave this mollusc a victory as the first international Mollusc of the Year.

The genome of the Greater Argonaut will reveal particularly important secrets of octopus evolution. Earlier studies indicated that this group separated from other octopuses early in the evolutionary history of the group. The Argonauts may retain some characteristics of primitive octopuses, but they also have unique adaptations such as the unique shell. Understanding these features of the genome will help us understand the evolution of octopuses, cephalopods, and of molluscs in general. The genes that control the formation of the special shell will also help to understand how skeletons and armour are made in all animals with hard parts.

In the two weeks a total of 21927 votes have been cast, from over 126 countries. The Greater Argonaut (Argonauta argo) has won 36 % – a total of 7888 votes for itself. In second place comes the The painted Snail (Polymita picta) with 6377 votes, followed by The Cave Clam (Congeria kusceri) with 5042 votes. The Snakeskin Chiton (Sypharochiton pelliserpentis) got 2005 votes and the Ram’s Horn Squid (Spirula spirula) 615 votes. Argonauta argo was nominated by Dr. Fabio Crocetta, researcher at the Anton Dohrn Zoological Station in Naples, Italy.

„I would like to take this opportunity to thank all the finalists for this exciting and especially informative competition. Through their creative campaigns, we were able to learn a lot about these fascinating animals. Thanks to this project, we were able to get media attention for mollusks and hopefully bring the public a little closer to their diversity and beauty and raise awareness of their increasing threatened status.” – said Dr. Carola Greve. 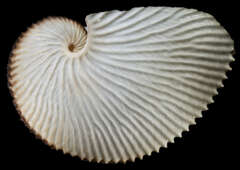 A shell of a female Argonauta argo, from the collections of the Senckenberg Museum and Research Institute, Frankfurt. Photo: Senckenberg 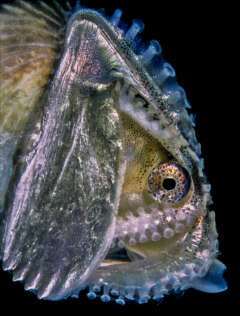