The rat, the common ragweed Ambrosia artemisiifolia, the wild rabbit, the emerald ash borer, and the flatworm species Gyrodactylus salaris have one thing in common: among all invasive species in Europe, they are considered to be the five that cause the highest costs. „Rats alone has caused costs of around 5.5 billion euros in the European region within 60 years,” explains Dr. Phillip J. Haubrock from the Gelnhausen field office at the Senckenberg Research Institute and Natural History Museum Frankfurt. 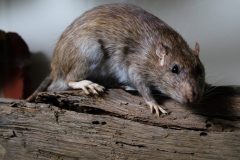