Together with his colleague Nikita Zelenkov from the Russian Academy of Sciences, Senckenberg scientist Gerald Mayr examined bird fossils from Central Asia that had previously been considered relatives of the cranes. The researchers now show that these birds are instead early representatives of the ostrich lineag. Until now, the early evolutionary history of ostriches was largely unknown. The reinterpretation of the fossil findings reveals that early ancestors of these birds exhibit an unexpected mosaic of traits. According to the study, published today in the journal “Ornithology,” ostriches originated in Asia – today, these large, flightless birds are exclusively restricted to Africa.

While most birds have four toes, in the ostrich that number has been reduced to two over the course of its evolution. This foot structure is unique among modern birds and helps the African ratite achieve its high running speed, among other things. “Species of the Ergilornithidae, a group of birds that was widespread in Asia about 35 to 10 million years ago, also have only two toes. Because of this feature, there was earlier speculation that these birds might be related to ostriches. However, this hypothesis was not widely accepted, and the Ergilornithidae were assigned to crane-like birds,” explains Dr. Gerald Mayr of the Senckenberg Research Institute and Natural History Museum in Frankfurt.

Fossil finds of the medium-sized and very long-legged Ergilornithidae are comparatively common at some Asian sites – especially in Mongolia. Until now, however, only fossil leg bones were known. Mayr and his Russian colleague now examined additional material of these birds and the closely related Eogruidae from a collection in Moscow. “This also includes the first known skull remnant of these animals. The finds date back to the 1970s – but have remained undescribed until our investigation,” explains Mayr, and he continues, “We were able to show on the basis of distinct skeletal features that the Eogruidae and Ergilornithidae are indeed Asian ostriches!”

The evolutionary history of ostriches was largely unknown until now, and the oldest undisputed finds of these birds come from the Miocene of Africa and are about 20 million years old. Based on their findings, the Frankfurt ornithologist and his colleague conclude that the ancestors of today’s ostriches were widespread across the Northern Hemisphere in the early Cenozoic – about 40 million years ago. According to the study, the birds evolved into the modern, two-toed ostriches in the steppes of Central Asia and then colonized Africa about 20 million years ago, where they are still native today. Another important result of the study is that early ancestors of ostriches differed significantly from their modern relatives in several characteristics.

“Interestingly, the bones of the Eogruidae and Ergilornithidae resemble those of the extinct, nearly one-meter-tall avian genus Palaeotis, which was found in the Messel Pit, a fossil site in Hesse. Its relationships were also controversial until now, although a relationship with ostriches had been discussed,” adds Mayr, and he sums up, “The reinterpretation of these finds provides us with a new and coherent picture of the evolutionary history of ostriches!” 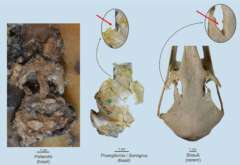 Foot bones of ostrich ancestors from the Cenozoic of Europe (Palaeotis) and Asia (Eogrus, Proergilornis, Urmiornis). The reduction of the trochlea for the second toe (red arrow) is characteristic of ostriches; this trochlea is still present in its original size in Palaeotis and Eogrus. Copyright: G. Mayr, Senckenberg. 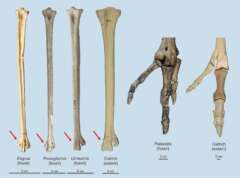 Skull of Palaeotis weigelti from the early Eocene (48 million years ago) of the Messel Pit near Darmstadt, Germany; a representative of the Ergilornithidae (Proergilornis or Sonogrus) from the late Eocene (about 35 million years ago) of Mongolia, and a recent ostrich. The red arrows indicate depressions for nasal glands, which are a characteristic feature of modern ostriches. Copyright: G. Mayr, Senckenberg. 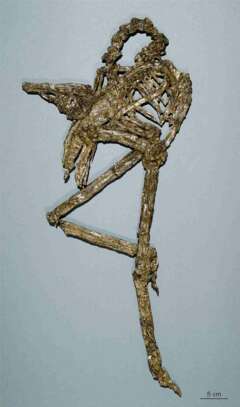 Skeleton of Palaeotis weigelti from the early Eocene (48 million years ago) of the Messel Pit near Darmstadt. Photo: E. Haupt/Senckenberg. 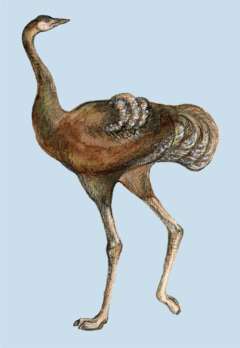 Reconstruction drawing of Ergilonis rapidus from the early Oligocene-Eocene (about 32-34 million years ago) of Mongolia. Copyright: Borissiak Paleontological Institute.