The Cuban painted snail is "Mollusc of the Year 2022"

Result of the public vote is now official

It is colourful, lives on land and reproduces with sophisticated mating rituals: the Cuban painted snail (Polymita picta). The newly crowned “Mollusc of the Year 2022” received the most votes in the international public vote and thus prevailed over four other finalists. This competition, initiated by the Senckenberg Nature Research Society, the LOEWE Centre for Translational Biodiversity Genomics (TBG) and the worldwide society for mollusc research (Unitas Malacologica), already attracted great interest in its first round in 2021. The call was also made this year to scientists and the public to nominate molluscs for the glory of the “Mollusc of the Year” title. From 25 February to 15 March 2022, all interested parties were invited to vote online for one of the five finalist species.

The finalists for the title “Mollusc of the Year 2022” were three snail species, one mussel species and a tusk shell or scaphopod. A committee of researchers from the organising institutions selected these top 5 from among 50 nominations for the 2022 competition. Then open to public voting, the the Cuban painted snail received the most votes by a large margin – it was chosen by 10,092 participants of over 16,000 total votes cast. As a “reward” for winning, its entire genome will now be sequenced via the LOEWE Centre TBG.

The two to three centimetre Cuban painted snail is known for the colourful variations of its shell. It also has an enigmatic “love arrow” – a chalk arrow used to stab mating partners in order to transfer sex hormones. The snails are male and female at the same time, without being able to fertilise themselves, and reproduce during the rainy season. They live for about one to two years. The Cuban painted snail is only found along a narrow coastal strip in eastern Cuba. There, however, it inhabits a wide range of habitats, from extremely dry sites to rainforests. It feeds on moss and lichens on tree bark. In this way, it helps to keep trees healthy and thus supports local agriculture. Due to habitat loss and poaching, it is considered endangered.

“We are pleased that the Cuban painted snail was selected. Its genome will be able to provide us with important information about the genetic basis of the colour variations of its shell,” jury member Dr Carola Greve, laboratory manager at the LOEWE Centre TBG, is certain. “In the case of molluscs, there are so far only a few species whose genome has been completely sequenced – and this despite the fact that they form the second largest animal phylum after arthropods,” says Greve.

For Prof Dr Julia Sigwart, section head of the Department of Malacology at the Senckenberg Research Institute and Natural History Museum Frankfurt, the renewed high level of interest in the competition is a great success: “When we initiated the competition at the end of 2020, our goal was to raise awareness of molluscs and their enormous biodiversity. We are now well on the way to achieving this. We would especially like to thank those researchers and mollusc lovers who nominated so many special and beautiful species.”

The Cuban painted snail has been nominated for the title “Mollusc of the Year 2022” by Dr Bernardo Reyes Tur, researcher at the Department of Biology and Geography at the Universidad de Oriente in Santiago de Cuba, Cuba. During the two-and-a-half-week competition, a total of 16,388 votes were cast from 148 countries. The Cuban painted snail (Polymita picta) prevailed with 10,092 votes and thus 62% against the four other species standing for election. The sea butterfly (Cymbulia peronii) came in second with 2,773 votes, followed by the naval shipworm (Teredo navalis) with 1,643 votes. The barge-foot (Fustiaria rubescens) received 1,115 votes, the sediment snail (Telescopium telescopium) 765 votes.

In addition to Prof Dr Julia Sigwart and Dr Carola Greve, the members of the competition jury for the “Mollusc of the Year 2022” were again Dr Tilman Schell, bioinformatician of the LOEWE Centre TBG, and Prof Dr Yasunori Kano, member of the worldwide society for mollusc research (Unitas Malacologica).

Information on the five finalist species in the “Mollusc of the Year 2022” competition. 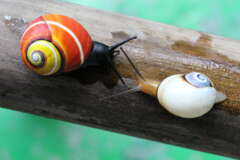 The striking colouration of its shell is one of the distinctive features of the Cuban painted snail, which was chosen as the “Mollusc of the Year 2022”. Photo: Bernardo Reyes Tur