The orange-spotted “zombie frog,” which measures just under 40 millimeters, is one of three newly described species discovered by Ernst and an international team in the tropical rainforests of Guyana, French Guiana, and northern Brazil, an area known as the Guiana Shield. All of the frogs belong to the genus Synapturanus and were classified as new species based on 12 different morphological characteristics, having previously been genetically identified as undescribed species. “Until now, little scientific attention has been paid to this genus,” Ernst explains, citing the animals’ habits: “The frogs’ habitats are difficult to access, and their ranges are very small; moreover, the animals hide underground, and their calls are rather difficult to differentiate.” 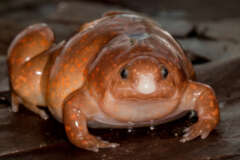