At the start of the 15th Conference of the Parties to the UN Convention on Biological Diversity (CBD COP15) in Montreal, Senckenberg scientists, together with international researchers, call for prioritizing the protection of deep-sea ecosystems and their organisms to safeguard the health of the oceans and the well-being of humanity in their “Policy Brief” published today. According to the position paper, it is critical to improve the state of knowledge on the biodiversity of deep-sea species in order to effectively protect them and the associated ecosystem processes. To this end, international strategies, infrastructures, and collaborations must be developed, supported, and funded to improve deep-sea research and to protect as yet undiscovered species.

Worldwide, 2.4 billion people live less than 100 kilometers away from a coastline – they are directly dependent on the oceans. “Deep-sea areas, on the other hand, appear very distant and insignificant at first glance; it is not immediately clear what benefits this vast ecosystem and its inhabitants hold for us,” explains Dr. Stefanie Kaiser of the Senckenberg Research Institute and Natural History Museum in Frankfurt, and she continues, “The deep sea, which extends to depths between 200 and 11,000 meters, is the world’s largest habitat, encompassing more than half of the Earth’s surface. It plays a key role both in global climate regulation, by storing carbon dioxide and heat, and in maintaining biodiversity. The deep sea is one of the most species-rich environments in the world.”

The marine researcher from Frankfurt and her Senckenberg colleagues Prof. Dr. Angelika Brandt, Prof. Dr. Julia Sigwart, Dr. Aidin Niamir, and Dr. Hanieh Saeedi, together with researchers from the Japan Agency for Marine-Earth Science and Technology (JAMSTEC), the Portuguese University of Aveiro, the National Oceanography Centre in Southampton, and the University of Plymouth in the UK, the American Scripps Institution of Oceanography, and the Smithsonian National Museum of Natural History in Washington D.C., call on political leaders to prioritize the protection of deep-sea ecosystems and their species in order to conserve biodiversity, thereby protecting the oceans’ health. The urgent appeal is prompted by the 15th Conference of the Parties to the UN Convention on Biological Diversity (COP15 CBD) in Montreal, which begins today.

Around 28,000 species of deep-sea animals have been described and named to date. “We know very little about the deep sea. The majority of its species are still unknown to us, and we are therefore unable to adequately protect them,” says Brandt, explaining the appeal, and she adds, “Yet, their protection is urgently needed. Humans leave their footprint even in the deep sea. Species there are increasingly exposed to pollution and habitat destruction. In particular, global warming, ocean acidification, and resource exploitation could lead to dramatic changes in deep-sea biodiversity – with as yet unforeseeable consequences for us humans as well.”

In 2019, the scaly-foot gastropod (Chrysomallon squamiferum), which lives near hydrothermal vents, was included in the IUCN Red List, becoming the first deep-sea species to be listed as “endangered” due to the threat of future deep-sea mining. In contrast, the numerous as yet undescribed and unnamed marine species – estimates put their number as high as 2.2 million – are missing from the list, which is significant for the protection of organisms. “And this is despite our assumption that more than half of the undescribed species are threatened with extinction!” warns Sigwart.

The researchers see the key to protecting deep-sea organisms in improved knowledge about the animals living deep in the oceans. “Species are the fundamental unit of biodiversity. Each species requires specific environmental conditions to live. When parameters change, e.g., due to human impact, organisms respond very differently. Knowing the species that occur in an area, naming them, and determining their distribution is essential for developing meaningful management plans for the protection of the deep sea,” explains Sigwart, and she adds, “In particular, we need trained taxonomists to describe species for marine conservation – because biodiversity and its conservation are vital for human well-being.”

Therefore, it is crucial to advance the exploration of the deep sea and the description of its species, state the scientists in their position paper. Establishing and supporting international cooperation to promote deep-sea exploration and our knowledge of the species is the scientific basis for preserving the “last great wilderness on Earth.”

“Effective protection of the deep sea will prevent the loss of hundreds of thousands of impressive species that will otherwise become extinct in the Anthropocene, the age shaped by us humans. We therefore urge all responsible parties to recognize the importance and value of all deep-sea species, and to place deep-sea conservation at the forefront of their goals to preserve global biodiversity,” adds Kaiser in conclusion. 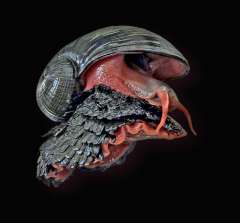 The scaly-foot gastropod (Chrysomallon squamiferum) is the first deep-sea species listed as endangered on the IUCN Red List due to the risk of deep-sea mining. Photo: Chong Chen, JAMSTEC 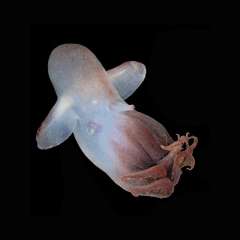 This Emperor Dumbo octopus (Grimpoteuthis imperator), which was only described in 2021, was again discovered in the Aleutian Trench during the AleutBIO expedition led by Prof. Angelika Brandt. Photo: Chong Chen, JAMSTEC 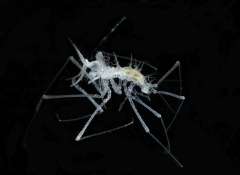