Endangered but not harmed

Frankfurt, 27.05.2022. Fin whales are the second largest creatures on our planet, surpassed only by blue whales. They can reach a length of around 20 metres – and require up to two tonnes of food per day. Accordingly, they release enormous amounts of nutrients – with significant effects on the ecosystems of the oceans. However, industrial whaling has significantly reduced their numbers. It was geared towards the oil of whales as raw material and was particularly intensive between 1880 and an international agreement in 1986. Today, the number of fin whales worldwide is estimated at about 100,000 animals; the species is considered endangered according to the Red List. A new study by scientists from the LOEWE Centre for Translational Biodiversity Genomics (TBG), the Senckenberg Biodiversity and Climate Research Centre (SBiK-F) as well as from Icelandic and Swedish research institutions shows the consequences of their decimation for the populations and especially for the genomic diversity of fin whales. Fortunately, their results show no long-term genetic weakening of this species.

After fin whales were hunted at the beginning of the 20th century until the local whaling industry collapsed in some places due to declining catch numbers – for example in 1904 in the waters around the Norwegian Finnmark – there were fears of glaring consequences, including the extinction of the species through inbreeding. For the study published in the scientific journal „Molecular Biology and Evolution“, the scientists now examined 51 genomes of a North Atlantic fin whale population from Icelandic waters for the first time. Using the samples from 1989, 2009 and 2018, they developed demographic models that allow conclusions to be drawn about population changes over around 800 years. The analyses focused on the question of whether whaling also affected the genetic diversity of fin whales.

The team concludes that whaling had a strong impact on the populations in the North Atlantic, decimating them to up to twenty percent of their previous size within about one hundred years. However, the team also showed that different populations were hit differently by whaling, as the genomes of some animals showed little or no trace of this population reduction. „Looking at the genetic diversity of a species allows us to draw conclusions about whether and how well that species can adapt to new environmental conditions or changes in its population, or whether it is likely to become extinct,“ explains the study’s first author, Magnus Wolf from the SBiK-F and the Institute of Ecology, Evolution and Diversity at Goethe University Frankfurt. „Therefore, genomic analysis often reveals developments before they become overt. In the case of North Atlantic fin whales, however, we were unable to detect any significant loss of diversity in the long-term perspective.“

Other genetic consequences within the depleted fin whale stocks also seem to have been absent. The scientists found no evidence of frequent inbreeding, where genomes become unnaturally similar, nor did they find a large number of genetic defects that would affect the population in the long-term. „Such mutations occur all the time, but they are more significant in small populations, because sometimes there are no animals without the mutation left to prevail,“ says Wolf.

Compared to more endangered whale species like the blue whale or the North Atlantic right whale, the recovery of fin whales seems to be primarily hindered by the current influence of humans. These include increasing shipping traffic and pollution of the seas. The International Union for Conservation of Nature (IUCN) has classified fin whales as an endangered species. Therefore, there is currently no all-clear for their situation, emphasises Prof. Dr Axel Janke, lead scientist of the study, scientific coordinator of the LOEWE Centre TBG and also working at the SBiK-F and the Institute for Ecology, Evolution and Diversity at Goethe University Frankfurt. „It is fascinating how genomic findings can add to our perspective on whale conservation. The field of genomics not only evolves to a key technology for conservation management but also helps us to understand what biodiversity is and how we can use it. Whales are not only iconic animals, but they also appear to be resistant to cancer despite their long lifespan of up to one hundred years and their body size. Decoding the genomic mechanisms that cause this paradox might help us approach one of the most impactful diseases in human history.“ 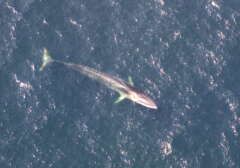