Honeybee venom has been used in traditional medicine for centuries as an anti-inflammatory. Only its main component, melittin, has been scientifically well researched. However, with its strong effect, the natural substance can also damage healthy cells when used. A team of researchers from Frankfurt am Main and Giessen has now discovered milder melittin variants in evolutionarily older wild bee species that seem to be more usable for pharmacology.

When we hear about bees, in most cases only the honeybee (Apis mellifera) is mistakenly associated. Wild bees, on the other hand, are only slowly humming their way into our consciousness, although they make up by far the most species in the group of bees and many plant species depend exclusively on wild bees as pollinators.

In a study published in the journal „Toxins“, researchers at the Hessian LOEWE Center for Translational Biodiversity Genomics (LOEWE-TBG) are now showing another facet of the importance of wild bees: in their venoms, which have been little studied so far, they were able to detect more original variants of melittin, a peptide of 26 amino acids and major component of bee venom. Melittin from honeybee venom has long been known to have a strong effect in laboratory experiments. It is about a hundred times more effective than cortisone in inflammation. Melittin is also being researched as an active substance against microbes and cancer cells. Its disadvantage: With its intensive effect, healthy cells are also damaged, which makes it significantly more difficult to use.

„The idea for our comparative analysis was that melittin only became so toxic in the course of evolution and that the evolutionarily older wild bees may produce more pristine melittin variants in the venom that are pharmacologically easier to use,“ reports co-author Dr. Björn M. von Reumont from the Department of Biosciences at Goethe University Frankfurt, an expert on the evolution of venom and venom genes in Hymenoptera, among others. „In the study, we therefore compared different melittin variants. Some of them are known from the honeybee, others we have newly discovered through our combined analysis of the molecules, the proteins, and the genome of the wild bee venom.”

„The focus of this research was the different modes of action on inflammation and cancer,“ says Prof. Dr. Robert Fürst from the Institute for Pharmaceutical Biology at Goethe University. His colleague Dr. Pelin Erkoc-Erik, first author of the publication, explains: „We examined the effects of melittin peptides on cell damage and the release of messenger substances and inflammatory markers – in both cancerous and non-cancerous human cells.“ One of the substances that caught the team’s attention was melittin from the violet carpenter bee, a wild bee species. In the laboratory analyses, this showed a promising effect on breast cancer cells.

The researchers agree that the melittin peptides discovered in the wild bee species indeed reveal new and less aggressive activities and thus possibly promise potential for future pharmaceutical applications. With these melittin variants, there is no need to compensate for the strong toxicity with inhibitory substances. The team now wants to pursue the results further with the expertise from various research areas. For example, von Reumont, a co-leader in the European Venom Network (COST Action EUVEN), is involved in a project that is conducting more detailed research on the evolution and use of venoms in bees and other invertebrates, including to treat cancer. Scientists from the Fraunhofer Institute for Molecular Biology and Applied Ecology IME in Giessen and the Fraunhofer Institute for Translational Medicine and Pharmacology ITMP in Frankfurt, who are involved in the study, are also following up on the new findings. Linking basic research and applied research in a translational approach is the goal of the LOEWE Centre TBG. 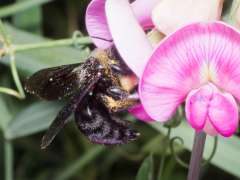 The venom of wild bees such as the violet carpenter bee (Xylocopa violacea), with its main component melittin, is less aggressive than that of honeybees, a team from the LOEWE Centre TBG discovered. In the future, it could be used against breast cancer cells, for example.
Photo: Björn M. von Reumont